The River Reporter — The Bethel Heritage Trail, part of the town’s celebration of the 50th anniversary of the 1969 Woodstock Music & Arts Fair, was launched with a ribbon-cutting ceremony on August 12. The trail is a permanent outdoor photo display in locations throughout the town. Each display has a description and interesting facts about the area.

According to the town website, “[Woodstock] is seen as a major political and cultural event in the history of the United States. The project commemorates and memorializes the fact that this event took place in the Town of Bethel.”

Throughout much of the year, Bethel is like many other towns in the region—quaint, charming, quiet and attractive. However, Bethel holds a special place in history, having played host to the 1969 Woodstock Music Festival that recently celebrated its 50th anniversary. There was plenty of excitement last August as the world collectively acknowledged Woodstock as a seminal moment in time; a concert that forever changed the American landscape and influenced a generation all around the globe.

Now that the dust has settled, I have time to explore, and in doing so, I stumbled across the Bethel Heritage Trailhead on Route 55 in Kauneonga Lake. I was peripherally aware that the trail existed but, amidst all of the Woodstock-related hoopla, lost sight of that fact until the trailhead sign (stop #1) caught my eye while I was parking in the town’s municipal lot.

“The Bethel Heritage Trail is a 10-mile loop of nine permanent outdoor photo displays” the sign informed, “with interesting facts and stories of the iconic festival. Follow the trail markers along the route.” I noticed one of those odd square-shaped bar code type things (known as a QR code) in the corner. I decided to take a photo of the map with my phone. As soon as the camera focused on the QR code, I received a prompt on my phone to “open Heritage Trail map,” which I did. The map and info popped up immediately, and I was instantly impressed. 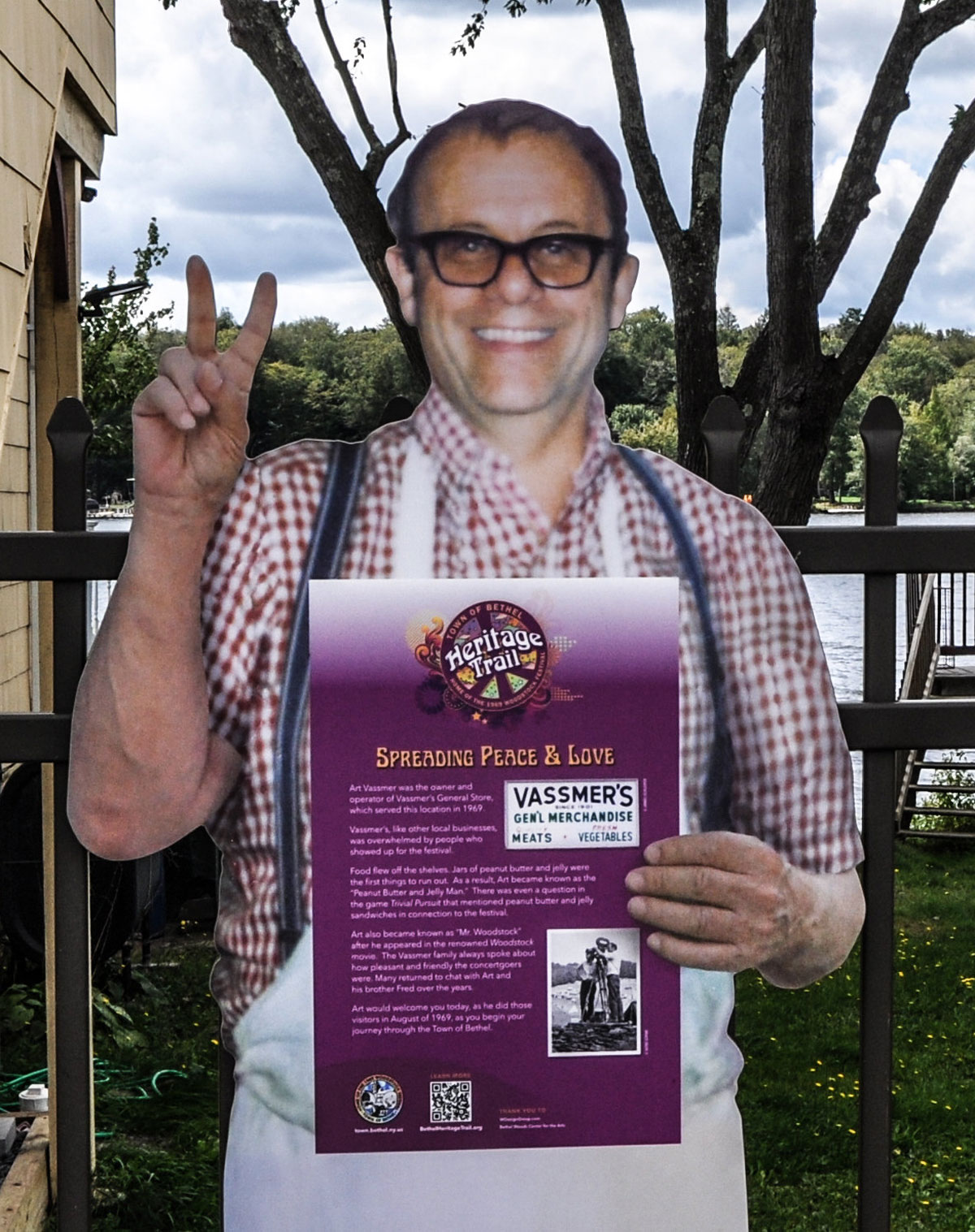 Noting that the next stop (#2) was within walking distance, I headed across the road, spotting a life-sized cutout of Art “Mr. Woodstock” Vassmer giving the peace sign to passersby on Kauneonga Lake’s restaurant row. “Also known as ‘the peanut-butter-and-jelly man,’ you may have read about Art in the news, or seen him in the Woodstock movie. Art operated his family store from 1901 until 2004.”

“Well that is indeed, an interesting fact,” I thought, and decided to look for other stops on the map. “Keep your eyes peeled for the Heritage Trail markers for directions to nearby sites,” my online guide read, “and please note that there may be some distance, up to a few miles, between some.” Reading that “The Corner” (where the clock tower now stands) of Route 17B and Route 55 was delineated as a stop (#4) on the trail had me puzzled. “I don’t think so,” I mumbled, as I steered toward the corner. “I live here, I’m sure I would have noticed. Oh, wait…” I said aloud, “there’s one of those little markers, and a sign. Who knew?”

Sure enough, I learned that in 1969 the El Monaco restaurant once stood on that corner and that it had “ended up serving as the improvised headquarters for the concert organizers.” There are vintage photos at each of the trail stops and the El Monaco site includes an image of an “Aquarian Exposition” staff pass. While there, I also learned that “The Woodstock dove is actually a catbird; originally perched on a flute.” By then I was hooked, and began to go out of my way to learn more. I called Bethel Town Supervisor Daniel Sturm who suggested that I stop in for a chat. I sat down with Sturm and Chris Cunningham, both of whom serve on the board of the Bethel Local Development Corporation (BLDC) and were instrumental in creating the Heritage Trail.

By placing the different markers around town, Strum began, “The idea was that when people come to visit, not only that they might attend a concert at Bethel Woods, but that the trail might lead visitors to other things of interest and places in town. Have you seen the VW bug on Happy Avenue?” Sturm asked. “Bethel Woods partnered with us for that stop (#5). They helped fund the recreation of the groovy painted vehicle that can be seen in the exhibit and Wade Lawrence and his team were instrumental in making that happen, providing us with archival photos, and Bethel woods helped to fund it.”

“This is still a work in progress.” Cunningham interjected. A few signs are still going up, but the majority of the work is done.

“The idea behind this project was to brand the town as the home of the Woodstock Festival in a way that it hadn’t been done before. Dorene Warner (W Design) was our consultant on the project, and she was just fantastic. We could not have done this without her.”

Nodding in agreement, Supervisor Sturm also credited others. “There were many hands and several partners” he explained. “Sullivan County partnered with us. We chose quality materials that will last for generations to come, and that’s not cheap,” he explained, “but with joint cooperation and an assist from Bethel Woods, the county and even private donation, the town paid the difference with funds specifically allocated for this anniversary year. As a result, we were able to create something lasting and wonderful.”

“Obviously, we could not have done this without the property owners’ cooperation and support,” Sturm added. “All of these people gave us permission to mount permanent Heritage Trail signage on their property—that’s huge. And Chris did an unbelievable job in getting the trail up and running in time for the anniversary, which drew tens of thousands of visitors to the town,” Sturm said, giving credit to Cunningham for a job well done.

I still have a few stops to make along the way. As promised, some are off the beaten path, but exploring the Heritage Trail and “keeping my eyes peeled” is half the fun, so I’m in no rush. I believe there’s a marker (#7) at what is now the Bethel Market Café on 17B, so I’ll plan on stopping for lunch before looking for Gabriel’s Farm (#9) and digging up some “interesting facts” on the who, what, when, where and why.